Polish Mennonites came from Netherland and Flandren. They settled down in Żuławy. Zulawy is Poland’s largest area located below the sea level. The depression of lowest parts reaches about 2 meters. Historically the area was an estuary of the longest Polish river – the Vistula which flows into the Baltic Sea. It was in the 14th century when an arduous process of taking the land from the sea started.

Hundreds of canals, kilometers of dykes, network of pumps and locks allowed for removing water and gradual drainage of Żuławy territory. A great share of this work has to be attributed to Dutch settlers – a hardworking, puritan community known as Mennonites. They represented one of the strictest branches of protestantism, which had a lot in common with Amish culture. 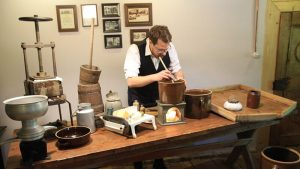 Machandel was a juniper based alcoholic drink with a smooth taste and firm kick. Originally produced by the Stobbe family in the nearby town of Tiegenhof / Nowy Dwor Gdanski

The Dutch and Flemmish Mennonites lived in Żuławy for over 400 years. They came to Poland in 16th century as refugees fleeing from religious conflict torn Netherland and Flandren. Poland was the most tolerant kingdom in Europe. It was here where they could find new home, peace and freedom. The Polish Mennonites were skillful farmers and the cheeses from Żuławy were appreciated all over Europe as a great delicacy. Their unique taste was said to be an effect of particular combination of climate, fertile meadows with juicy grass and salty sea air. It is not widely known, but in the 19th century a group of Swiss immigrants settled in Żuławy. They brought here their own cheese production culture and modernized local dairy industry.

Claasen, Penner, Dyck are the most common surnames of Mennonites who lived in Polish Zulawy

Most Mennonites emigrated to Russia in the early 18th Century after Zulawy became Prussian. In 1945 Żuławy was flooded and many villages were burnt by the Red Army soldiers. A number of preserved architectural heritage monuments can still be admired in the region. These are farmers’ houses with beautiful arcades and wooden decorations. One of the best preserved Mennonite farmer house hosts a local restaurant Maly Holender. Żuławian churches are picturesquely located on the banks of canals and often remember the Medieval times.

Some of them have not been rebuilt after the World War II destructions and are now romantic ruins. There are also many historical Mennonite and German cemeteries which are now taken care of by the local Polish communities. The beauty of a flat melancholic, yet a romantic landscape makes Żuławy a place which definitely deserves to be known closer.

Descendants of Polish Mennonites who were forced to leave Zulawy after WW2 live today mostly in Netherland, Canada, Sweden and USA. We arrange private tours to Poland including visiting the old Mennonites settelments and villages. The Żuławy Musuem has a permanent exhibition dedicated to Dutch settlers as well. We are tasting local Mennonite cousine and legendary Werderkase cheese. Here you wil find More information about exclusive private Mennonite tour

The history of Polish Mennonites
Siege of Danzig 1807 and it’s consequences.