Hanseatic League and the Crane in Gdansk.

Hanseatic League and the Crane in Gdansk. 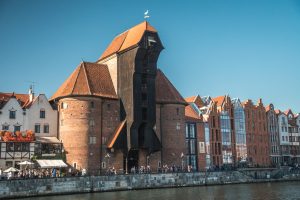 The Crane in Gdansk is one of the most famous symbols of Gdańsk and Hanseatic League heritage.

Gdansk Old Town is one of the best examples of hanseatic cities. From 1361 or 1363 Gdansk was Hanseatic League member.

Hanseatic League became one of the most powerfull players in Northern Europe in 14th century. Hansa was able to control the commercial axis connecting the East and the West, from Novgorod to Bruges and London. Anglo-Hanseatic War and Dano-Hanseatic War were the most significant military conflits between confederation of market towns and European kingdoms. Gdansk or Danzig was the central point of the Hanseatic network in Northern Europe. 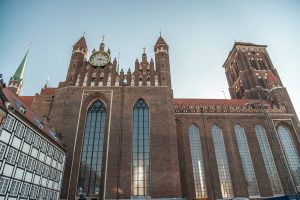 Gdansk / Danzig was an important member of the league in the 14th and 15th centuries while being part of the State of the Teutonic Order and Polish-Lithuanian Commonwealth. Merchants from Gdansk were more powerfull among other hanseatic merchants. Moreover, Gdansk and other Prussian cities have invested most of its efforts in the export of bulk commodities, for instance wood, corn, potash, copper, wax and iron from Poland to the West.

The Crane in Gdansk was capable of lifting objects with a weight of up to two tonnes.

In summary the Crane in Gdansk was built between 1442 and 1444. It was the biggest lifting device in Hanseatic League indeed. This is a spectacular example of a medieval port crane and twin-tower gate all-in-one. The main crane mechanism consisted of a set of treadwheels. Treadwheels were powered by four crane workers who walked inside the treadwheel. Generally the Crane works like a hamster wheel but not so fast 🙂 The Crane was used for cargo handling operations, raising and lowering masts on various vessels as well.

The Crane, St Mary’s church and Artus Court are best known hanseatic remainings in Gdansk. But there are many other hanseatic places in Gdansk like the Great Mill or the The court of the Fraternity of St George. Nowadays the famous crane is a part of the National Maritime Museum in Gdansk

Explore Hanseatic League history with me. The private Hanseatic tour in Gdansk is the best chance to study Late Medieval Period in Northenr Europe.

Gdansk torus, how to explore Gdansk in one day