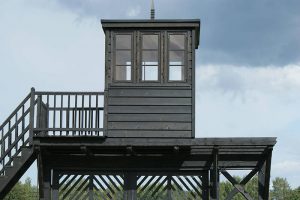 Stutthof was the first German concentration camp set up outside German borders in WW2, in operation from 2 September 1939. The previous day hundreds innocent Polish civilians who lived in Free City of Danzig has been arrested by local police and Nazi paramilitary units. The 2nd September 1939 a group of 150 Poles has been deported to the barbed wire area near Stutthof village.

After 2 weeks hundreds of Polish minority has been imprisoned in Stutthof concentration camp. Innmates were forced to bulid barracks and all facilities from scratch. The total number of prisoners is between 110 000 and 120 000 innmates from over 25 countries. Jews, Poles and Russians were the majority of prisoners in Stutthof. Other nationalities deported to Stutthof came for example from Finland, France, Denmark, Norway, Netherland, Belgium and Baltic States. 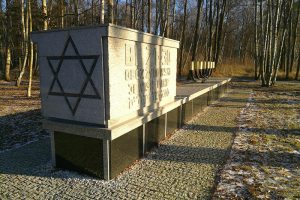 „The first night in Stutthof I will never forget. Two thin, hideous woolen blankets with dirt stains everywhere were the bedding. We lay together and froze so we gritted our teeth – a long and horrible night”

S.M.Olsen, Inside the Gestapo wall – and the journey home from there. Based on diary notes by Enok Johan Bærland.

Condition in the camp were extremely harsh. Thousands prisoners died as result of hunger, executions by shooting, hanging, gassing, lethal injections, beatings and torture. Many innmates died in typhus epidemics that swept the camp in the winter of 1942 and again in 1944. The biggest number of prisoner died during forced evacuation, the Death March in January and February 1945. Over 65 000 prisoners, more than 50% of innamtes died in the camp between 1939 and 1945. The Red Army has liberated the camp on the 9th of May 1945.

The Stutthof museum webside contains a lot of useful information for visitors.

In my opinion visiting Stutthof is very important, especially for younger generations, even students and teenagers. They need to see the evidences of Nazi crimes against Jews and other nationalities during WW2.

If you are interested to visit this place, be aware this is an extreme experience. You can check prices and order a private tour to Sztutowo direct on VIATOR This is door to door service. The tour is avaliable from other locations than Gdansk. The final price may depend on the distance from the place you overnight.

Please visit https://www.gdansktrips.com/gdansk-trips/ to get more information about private tours including private tour to Stutthof from Gdansk. Feel free to CONTACT me if you have any further questions.

Malbork Castle. The former capital of the Teutonic Order.